It's true...it was my birthday yesterday...March 25th...it was a good day...fun with my family...who could ask for more!!!
It started Tuesday though, when Klous & I made my birthday cake!! Ryan hadn't said anything about making one...so I figured it was up to me!! I wanted to be sure and get the yummy Angel Food Cake that my Mom always made for Dad...so I had to make it...Klous had fun helping Mommy. We baked the cake...he went down for a nap...20 minutes later he was in his bed yelling for me...darn it, why didn't he sleep longer?? I went in there and he looked at me with bright eyes and said..."Mommy birthday cake all done, make frosting??" It was cute...who could pass him up!!
So he came out and we made the frosting...he was all ready to help, look at that smile :) 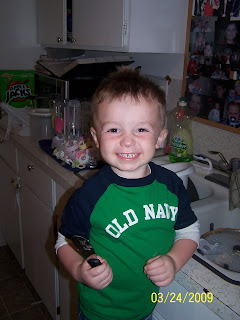 Once it was frosted I went to get the camera...came back to the kitchen and he decided he needed a taste...so since he had already done it, I made him do it again to pose for the picture!! 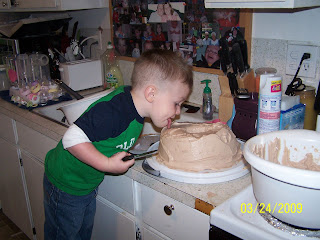 Then this is the best part of making it I think...dipping the extra pieces of cake into the extra frosting.... 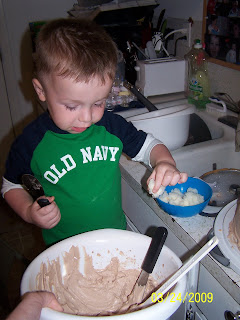 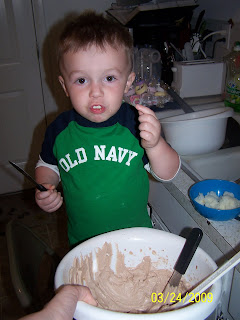 The finished product...there's ton of frosting on it, but it's so yummy...and I'm sure it's real healthy too :) 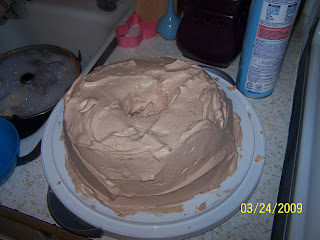 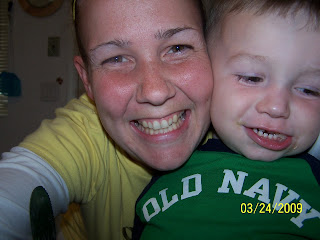 Then Daddy came home from work...we did our stuff Tuesday night...went to bed, and woke up Wednesday morning. When I woke up...from my phone ringing at 8:25 (my dad calling to say happy birthday)...I missed the call, but got up and called him back. Ryan was supposed to have the day off...but when I woke up, there was no sign of Ryan or Klous...???? Where did they go??? I chatted with Dad and got done with that...sat around for a little longer, then my boys came home!!! They had to go get me donuts and chocolate milk...how sweet!!! They gave me the cards/gifts...and the gift was to get a "make-over"...maybe Ryan thinks I need some "uplift" on my birthday as I get older!?!?!?! So he said I got to go get my hair cut...nails done...and pick a new outfit. I got my hair cut...got a new outfit, but passed on the nails...might have to be a girls night sometime soon!!! We'll see.
Anyways...after getting all that done we came home for the kids to take naps...got to hang out with Ryan for a bit and just relax...it was great!!! Then it was time to get ready for my big night!!! Got all showered and "prettied" up for my hot date with my hubby!!!
I wanted some pictures of me and the kidlets before we left...so here's Mommy and her kiddos...Aysha looks a little concerned in the first one... :) 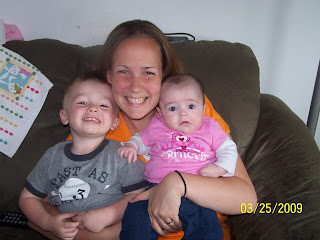 Then we got another one...we're pretty cute huh!!! 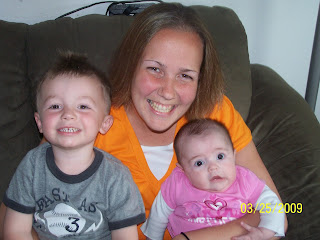 Mommy and my baby...Klous ran off before I could get a picture of me and him...guess he had enough!!! 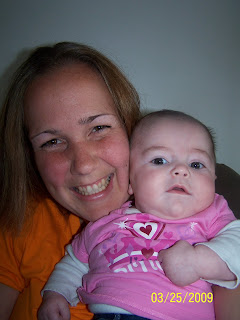 Ryan had it all arranged for his sister Shauna to come watch the kids, while we went to West Valley to see "The Phantom" at Hale Center Theatre. I was a little "un-excited" at first, because I'm not a big theatre fan...but got more excited when I found out it was the Phantom...I really REALLY like the Phantom of the Opera...and having been to France I like to be able to see the sites back there. So Shauna came over with Zack and played with the kids...gave her the low-down on what needed to be done...and we headed up the West Valley.
We were gonna do dinner then the play...so we decided on Applebees since it was right across the street from the Theatre...I got a couple pictures first though...
Here's the sign for the performance... 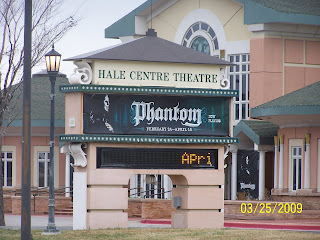 And the Theatre...a pretty cool looking building I think!!! 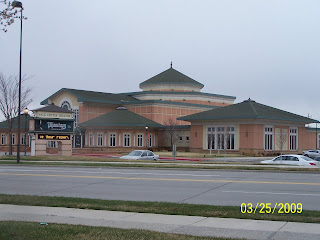 We had some yummy dinner at Applebees and of course Ryan had to be a dork in the pictures...we only got one decent one of him actually smiling, but I looked dumb...so this is the one I'm posting!!! Oh and of course he had to tell the server it was my birthday...so yes they brought me ice cream and sang to me...woo hoo. So embarrassing :)
Me and my babe :) Gonna be 8 years this year of being together...WOWZERS :) 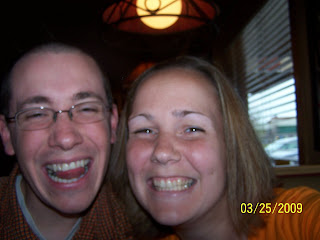 After dinner it was off to the show...it was pouring rain outside..so thank goodness for my sweet hood...didn't want to mess up my pretty hair ;) 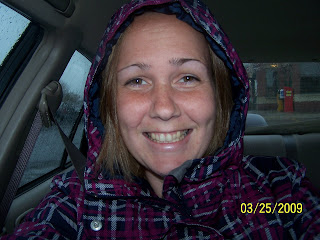 Ryan didn't want to get water on his glasses either...so we're the hoody twins!! 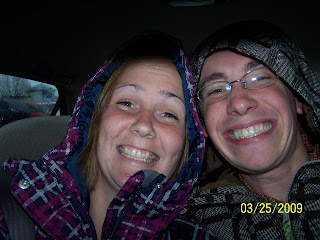 The performance was good. It wasn't Andrew Lloyd Weber's version...so it was different. It was the same story pretty much, but different music. It was still good, but I'm a bigger fan of Andrew Lloyd Weber's version!!! It was fun and was just nice to be with Ryan with no kids...and it was a fun experience. Now I won't be so ANTI when it comes to going to a play I suppose!!! After the show was done we were leaving the theatre...coming down the stairs and all the cast was by the doors. I told Ryan we should get a picture with the "Phantom"...but didn't have anyone to take the picture...so I just went up to him and asked if he'd pose for a picture with me since it's my birthday ;) He of course said sure...and wished me a Happy Birthday!! It was nice!!! (no I didn't give him the flowers :) ) 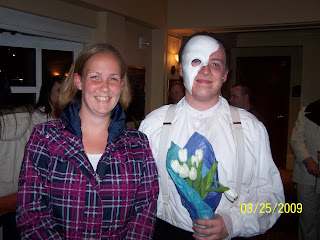 It was a great day...I'm so lucky to have such an amazing husband who loves me so much. Thanks to all my wonderful family and friends who called, stopped by, emailed, left me a message...everything....THANK YOU. I love you all and appreciate you thinking about me!!! Now on to another year...woo hoo :)
Posted by The Jones :) at 7:59 AM

Happy Birthday, sounds like you had a fun day!

Well Happy Birthday Becky! It sounds like your day was so much fun! Your family is just adorable. What kind of cake frosting was that? I love cakes! Also, if you need a girls night out, count me in! I haven't had my nails done since high school! Yikes!

That cake looks delish! Glad your birthday was a good one!

Answer to Many said...

Happy Birthday! We are going to see Phantom in just a few days! I can't wait.

Well....it looks like you had a fun-filled birthday! I got to see Phantom on a choir trip to Chicago? I think? It was good, but not as good as "The Phantom Of the Opera"...I agree with you. I am glad you had a great day!
Love you!!!

I am glad you had a great Birthday! It is always nice to get date time without the kids.

I am glad you had a great Birthday! It is always nice to get date time without the kids.

What a great birthday.. I think he really loves you! you have a thoughtful husband. your hair is cute and you have one little budding baker in Klous. (I've totally done that before... had them pose for a picture I missed.)

I loved Phantom! I got to see it in Las Vegas at the Bellaggio with my sisters. It's a little bit shorter version than you see regularly in the theatre from what my sister said... I guess they want you back out at the gambling table but whatever it was amazing and I had a great time.

Happy Birthday! I love the Hale theater and would love to go back anytime I'm in Utah. You should see A Christmas Carol there, it's amazing.

I've tried commenting on this for days now and our internet is so slow it always fails!!!
But here it goes....
I want to put like 10 comments on this one post!!
1.. HAPPY BIRTHDAY!!
2.. I want that cake!!
3.. Klous is such a handsome little sweetheart!
4.. Your husband is SOOO sweet for making such an awesome day for you!
5.. A make over day sounds AWESOME. And is probably the only way Danny's going to get me to care what I look like right now! :D
6.. I'm supposed to think of 10 right?... hmm
7.. You look beautiful! :D
8.. We saw the Phantom of the Opera in Las Vegas last year and it was AWWWWEESSOOMMEE!!!
9.. UMMMM
10.. HAPPY BIRTHDAY!! 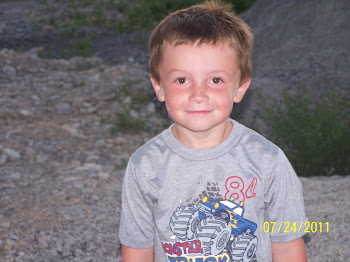 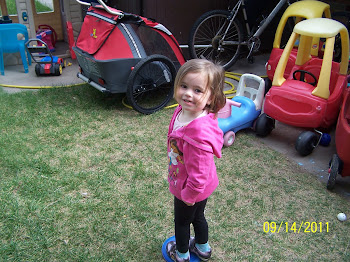 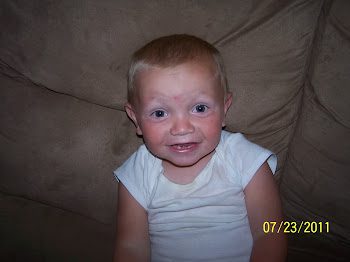